When to Have Your Dog Spayed or Neutered

You just adopted a cute and cuddly new puppy. All the new information can be overwhelming: vaccination schedules, when to switch from puppy food to adult food, heartworm preventative, flea preventative…the list just seems to go on and on. One thing you don’t need to think about (for a few months at least) is when you should have your new companion spayed or neutered. What is the right age for this to happen? What are the benefits of spaying or neutering? We’ll go over the facts and timeline below for dogs in Fairfax. 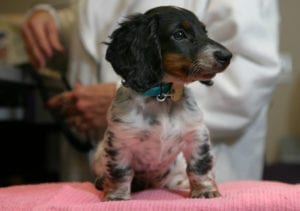 What is the best time to have your dog spayed or neutered?

For dogs, the time for surgery depends on the size or breed, age, and additional factors. Smaller-breed dogs like Yorkies and chihuahuas (or any breed or mixed breed that is estimated to be under 45lbs when fully grown) can usually be spayed or neutered earlier than larger-breed pups. Smaller-breed dogs usually experience their first heat cycle at around five to six months, and most veterinarians and veterinary governing bodies recommend spaying them before the first heat cycle occurs (male dogs follow the same timeline for neutering, even though they will not have heat cycles).

Larger-breed dogs (those who will be over 45lbs when full grown, like Labradors and Newfoundlands) usually have their first heat cycles at the same time as small-breed dogs, but sometimes the spay or neuter surgery will be delayed until the pup is finished growing. Large-breed male dogs are commonly neutered between nine and fifteen months old, after their growth has stopped. Female dogs are usually spayed between five and fifteen months, depending on their growth rate, first heat cycle, and home factors. If you would rather not have to deal with a female dog in heat, your vet can help estimate when your pup should have their first heat cycle and schedule a surgery date for you.

Animals adopted when they are older can be spayed or neutered any time after the 5-month time frame. Some rescues will spay or neuter puppies before the 5-month mark, based on veterinarian recommendations. This will not cause your dog any harm in the short or long term. If you adopt an animal from a rescue, it will usually be spayed or neutered before adoption. This is to help prevent pet overpopulation and also decrease medical risks later in life. If you adopt an animal too young to be spayed or neutered, you may need to sign a contract to bring the animal back for the surgery or provide proof that you have had the surgery done by a certain age or time. Some breeders may also have you sign sterilization contracts, unless the dog will specifically be a breeding or show dog.

Why should I spay or neuter my dog?

There are a number of reasons to spay or neuter your dog, including the pet overpopulation mentioned above. For female dogs, spaying prevents something called pyometra, which is an infection of the uterus. Pyometra is a serious condition that requires surgery and antibiotics to save the dog (sometimes the surgery is done as an emergency surgery if the infection is serious enough and can cost thousands of dollars). When a dog is spayed, the uterus and ovaries are fully removed, so an infection in those organs is not possible. Spaying also prevents the chance of uterine or ovarian cancer as well as mammary cancer. Mammary cancer can be caused by hormones secreted by the reproductive organs. Like other cancers, it can metastasize to other organs and is fatal in about 50% of cases. Without the hormones secreted by the reproductive organs (the uterus and ovaries), your pup will have an extremely limited chance of developing mammary cancer. The spay surgery will also eliminate your dogs heat cycles and the resulting bloody discharge, crying, and other behaviors. The spay surgery involves an abdominal incision under general anesthesia. The veterinarian will then remove the uterus and ovaries and close the incision. Your puppy should be kept quiet for about 14 days after the surgery, so she doesn’t harm her stitches. The only follow up from a routine spay surgery is usually just a quick recheck so a veterinary professional can look at the incision and remove any stitches that are external.

Neutering involves a small incision in the lower abdomen, but the abdominal wall is not opened as in a spay surgery. Only in rare cases when one or both testicles fail to descend does the veterinarian need to go into the abdomen of the dog. The recovery time from a neuter is around the same as that of a spay surgery, but there are usually no external stitches. Because the testicles are fully removed during a neuter, the chance of your dog developing testicular cancer drops to zero. Like mammary cancer, testicular cancer can also metastasize and spread. Intact male dogs can also have problems with enlarged prostate glands that can prevent them from urinating normally. This concern is greatly reduced with the neutering surgery.

Neutering also reduces the risk of your male dog fighting with other dogs or animals and having a strong desire to roam.

The decision to spay or neuter your dog and when the surgery should happen should be discussed with your veterinarian. A variety of factors, such as age, health status, breed, and size will help determine when is the best time to spay or neuter your pup. Non-surgical alternatives such as injections are a possibility to neuter your dog if they are not a surgical candidate. Some alternatives may be available for female dogs as well. If you and your veterinarian decide to leave your dog intact, monitoring and exams should be performed to ensure your dog doesn’t develop masses or problems relating to being intact. Close monitoring for mammary tumors especially should be done frequently.